Email ThisBlogThis!Share to TwitterShare to FacebookShare to Pinterest
I live in LA - the movie capital of the world, the land of dreams, blah blah blah. In order to do more of the Hollywood-y stuff, you need cash. Clubbin', concerts, shopping, shows - all require moolah, more often than not moolah I don't have to spend. Damn failing economy. But I often forget about the cheap, if not free, things to do in this city until recently. 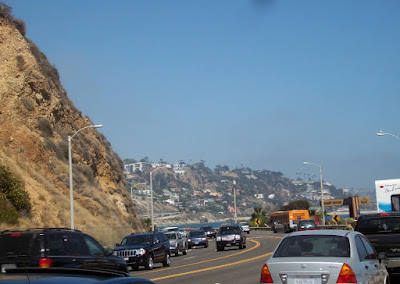 Just as the name suggests, this stretch of road runs parallel with the coast; my favorite area is between Santa Monica and Malibu. Spectacular scenery - driving north, you got the mountainous terrain on your right and crashing waves on your left. A great place to get away from the city, sit on the rocks, and breathe in the ocean air.

Remember the show that used to be on Comedy Central of the same name? This is where they came from. Hilarious sketch comedy and improv. You'll often see Rob Huebel, Matt Walsh, Paul Scheer, Jimmy Pardo, and many more that you may not recognize the names, but you'll know them when you see them. Best of all, this great comedy comes at a price of $5-10, unlike the local comedy clubs that are $20 plus a min of 2 drinks at about $10 each. 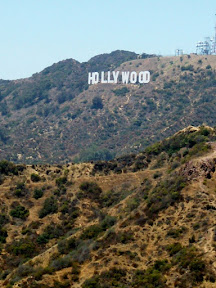 I finally got the chance to go to the Observatory. Parking is near impossible 99% of the time. But if you do get the opportunity, it's worth it. Gorgeous views of the Hollywood sign, downtown and surrounding cities, and the mountains. (More gorgeous if you're able to see through the smog). Next time, I'm going to have to hit the Observatory. I mean, come on... they have the Leonard Nemoy theater!
And of course, nearby is Griffith Park, complete with pony rides, tennis courts, a carousel, and the zoo. 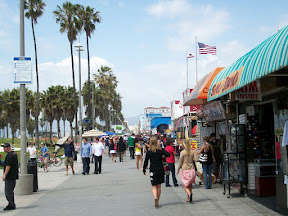 Nothing beats the local freak show. Ocean Front Walk is home to street performers, psychics, artists, skaters, bodybuilders, and more. Head down on a Saturday, and you'll never be disappointed. For food, be sure to hit the Sidewalk Cafe for yummy sandwiches and drinks, or C&O Trattoria to overdose on pastas.

So, there are just a few cheap, if not free, forms of entertainment in LA when you're strapped for cash.