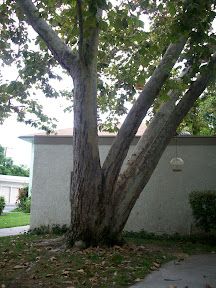 I woke up much earlier than I should have. I was so sleepy, but unable to fall back to sleep. In an effort not to wake up Joe, I decided to get some air on the back steps.

It was quiet. The neighbors were able to sleep-in today like I should have. The air was crisp and chilly enough for me to throw on a sweatshirt (chilly in LA is about 70 degrees). After a minute or two, I was no longer stressed that I hadn't slept enough, but became very relaxed - it felt like fall. 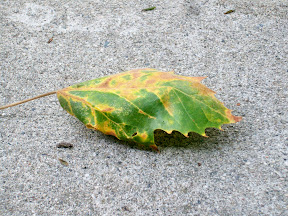 There were many leaves scattered on the ground, although they had fallen before they had changed to autumnal hues. The wind would lightly blow them across the grass and sidewalks. 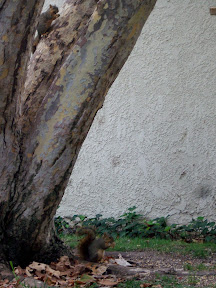 The only things stirring were the resident squirrels and the neighbors' cats. The squirrels were scouring the ground, looking for seeds and nuts, while the cats looked on longingly. I'd throw a peanut every so often towards the squirrels which would entertain the cats. And me as well. 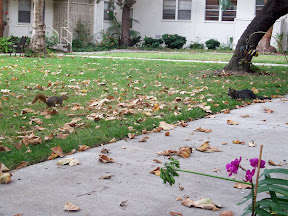 Lily, the dark tabby, is a squirrel-chaser. This must be pretty routine as the squirrels actually aren't that frightened by her. Try as she might, she never gets close to catching them, and only sprints so long before giving up for a breather. In my head, I can hear the squirrels laughing as they prance away and scramble up a nearby tree. 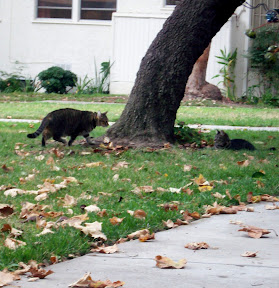 In the meantime, the other neighborhood cat, Boo, just wanted some attention from Lily, who was not having any of that. She'd hide in the bushes or the fallen leaves with a close eye on a squirrel. (If you look closely, you can see Lily's ears and eyes in the bushes in the pic above on the right with the eating squirrels.) But Boo, chunky, stumpy, and kinda awkward, would come bumbling up behind her saying in a Barney voice something to the effect of "Hey, whatcha doin over here?" and the squirrel would scamper several feet away. This would upset Lily and she'd swat Boo across the nose and run over closer to the squirrel, where Boo would disrupt her once again. 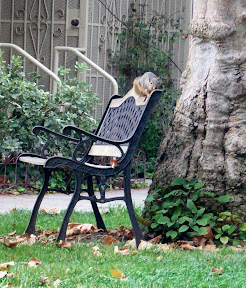 Eventually Lily gave up and ran towards her door to go home, with Boo close behind. The squirrels once again could search for seeds in peace. And I swear one was snickering as Lily ran away in defeat.

That was as much activity as I could stand for an early Sunday morning. Time for some TV.