Email ThisBlogThis!Share to TwitterShare to FacebookShare to Pinterest
As a young kid growing up in Catholic school, we celebrated almost each and every little saintly event that no one outside the church had ever heard of. And no time was busier than the fall/winter season.
All Saints Day, All Souls Day, Advent, of course Christmas, various individual saint holidays - there was a lot going on. But none was weirder to me than St. Nicholas Day. Yes, over the years, St. Nicholas had developed into Santa Claus, and we celebrate him as the jolly old gift giver on Christmas Eve. But Catholics like to celebrate the deaths of the saints, so the original Secret Santa is celebrated on December 6th. St. Nicholas was the patron saint of sailors, and is known for helping the downtrodden. He was born into a wealthy family, but recognized the plight of the poor and ended up giving away most of his inheritance. He would leave bags of gold under the windows of 3 women whose father was going to turn them into prostitutes to make money. The women were then freed. Ho ho ho. 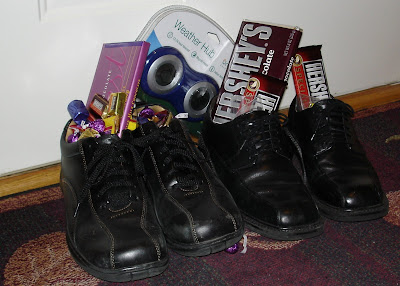 So growing up, how did we celebrate the Feast of St. Nicholas? By going to school, and leaving one shoe outside the classroom door. For about an hour, we'd have a class of one-shoed children. During that hour, St. Nicholas (ah hem... more accurately, I think it was the principal) would come around and put a piece of candy in our shoes- snickers, milky ways, most likely leftover Halloween candy. Once our teacher received the secret wink through the window or whatnot, we all busted out of the classroom to grab our candy from our hopefully not-foul-smelling shoes. Five minutes later, candy gobbled up, the day went on like nothing ever happened.

How leaving gold outside windows of prospective hookers has led to the origin of Christmas stockings and then leaving out shoes for candy, I have no answer for. After searching the webbernets, I have been unable to fill in the blank.
However odd of a tradition, I still have to give it props. Who doesn't like free stuff?
Tags: Holidays