Email ThisBlogThis!Share to TwitterShare to FacebookShare to Pinterest
Poor Phil. All he wants to do is sleep in on a cold winter's day. But then he's abducted from his bed, pulled into 10°F weather or colder, and blinded by hundreds of flashing lights. What's a rodent to do? 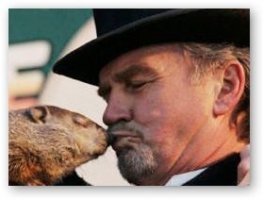 Here's a bit of info on one of the oddest national holidays in the US: