The trouble with berries

Email ThisBlogThis!Share to TwitterShare to FacebookShare to Pinterest
A few weeks after the new year and thus begins the travel season for work. I'm only 40 miles from home, but still far enough that I have to stay in a hotel. 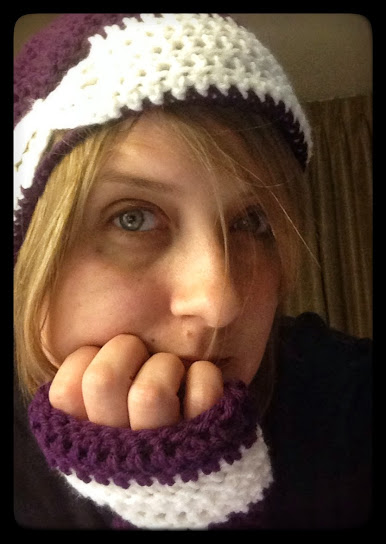 On the first few nights, I didn't have any plans. Luckily I brought my notes for my zookeeper class (my final is next week. Eeek!), as well as some yarn, to keep me busy. So one night, I had some time in the evening to whip up a hat and fingerless glove set for a coworker. She's from Chicago, where the temperature has barely lifted out of the negative degrees, and there's no more room in her yard to pile the snow from the snow blower. A little homemade warmth won't solve ALL her problems, but at least she'll be a little cozier.


It seems like I can't do this one specific trip every year without something weird happening. Last year, I had some young neighbors who thought that blasting the tv would cover their loud 'love' session and hide the smell of their pot. Yeah - not quite.
That was more of an annoyance. This year I got an interesting phone call. As I'm staying in a hotel with a food court, I tend to make my way to the Sbarro or Baja Fresh for some dinner, but I decided to treat myself to some room service dessert - Chocolate mousse with raspberries on top. I'm not a fan of raspberries, so I just picked them off and ate the mousse. When I was done, I put the cart with my dirty plate into the hallway.
The next day, my room phone rang - it was the manager of the hotel. "I apologize for your dessert last night and will remove the charge from your room bill." I basically said apologize for what? He said that on the pick-up service card, there was a comment of dissatisfaction. And I said, no, the dessert was just fine; there were no problems. He then got more specific and said the note read "Mold on the raspberries - are you kidding me?!" I had to giggle a bit, and told him that I wasn't the one who wrote the note. He apologized once again and reiterated that the charge would be removed from my bill.

So basically, someone passing by in the hallway saw the food cart, decided to eat the discarded raspberries, and were then unhappy enough with the raspberries that they would leave a nasty note that the berries they didn't order or pay for were bad?! Who does that? Can't wait to see what next year brings me.